That is a lot of money for a state where only two Planned Parenthood’s even exist – one in Birmingham and one in Mobile.  Not only that, but recent reports from the Department of Public Health confirm that both facilities have been unable to perform abortions for more than a year.  That means little to zero profit.  Planned Parenthood is a failing business in Alabama.  And yet, PPSE keeps pumping money into this state, trying to win influence and stop pro-life efforts.

Earlier this year, PPSE even purchased a new property in the downtown Birmingham area.  When the media got wind of it, Planned Parenthood announced their intent to build a new clinic, noting that their current building was not up to date (or even worth fixing).  What they did not announce is that the new property is also right in the middle of an incredibly large Black population – far different than the population surrounding their failing location off of Highland Avenue.

This is an even more obvious sign of Planned Parenthood’s desperation to stay afloat and peddle abortion to Alabama women.  Planned Parenthood is notorious for locating abortion centers in neighborhoods with high populations of Black and Hispanic women – 79% of their locations nationwide.  If PPSE is going to rebuild in Birmingham, they know exactly which neighborhoods they want to target.

Planned Parenthood also knows that Alabama has one of the most disproportionate abortion rates in the entire country. While the Black population makes up just over 25% of Alabama’s total population, Black women are having over 60% of the state’s abortions.  For an organization that has made millions off of exploiting Black women across America, Alabama would be a very lucrative state in which to expand.  And that is really their end goal.

On their website, PPSE currently makes sure to boast of their long established place in Alabama (all two clinics), citing the Birmingham affiliate, created in 1930, as the “oldest in the Southeast.” Despite two failing clinics and zero gains in this past week’s election, PPSE is not likely to just let this foothold go.  Rather, they seem “all in” for expanding their reach, buying buildings and expensive political ads.  Not because Alabama citizens want them here, of course – their lack of business makes that obvious – but because they see an untapped fortune in our women and preborn children. 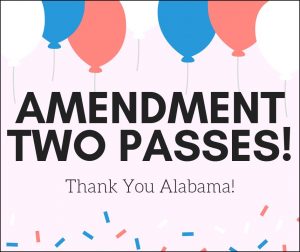 That’s why PPSE also fought so hard against Amendment 2.  An amendment that recognizes the rights of preborn children puts a huge wrench in the abortion giant’s plans to exploit the South.  It must have been quite a blow to see 59% of Alabamians still voting for life after spending $1.4 million dollars on ads to convince us otherwise.  The thing PPSE forgot to take into account, though, is that they don’t live here.  We do.  And citizens made their voice very clear in this recent election.

While it was an exciting week for pro-life citizens, those who work in the pro-life movement every day know not to get too comfortable.  Planned Parenthood doesn’t like to lose, and we still have a very long way to go.  Thankfully though, our determination comes from knowing that every human life possesses innate dignity and deserves to be protected.  Planned Parenthood, on the other hand, draws their inspiration from greed and the destruction of the human family.  They might seem stronger at times, but they are not well-grounded.  To put it simply, we have the better foundation, and we can stand much, much longer.  Planned Parenthood, as we saw in this election, is not as powerful as it thinks.

In the next few months, CEC For Life plans to continue taking on this Goliath in Birmingham.  Like our campaign states, #WeSayNo to Planned Parenthood and YES to an abortion-free Alabama, where women are supported and children are safe in the womb.  Planned Parenthood may have started in Birmingham in 1930 but this is 2018, and we don’t need them in our state.

Your voice and involvement will be vital as we make that message clear in our community.  Please be sure to keep a close eye on our Facebook page, emails, and announcements.  We are definitely celebrating the passage of Amendment 2, but we are not letting up in the fight.  And, no matter how much money Planned Parenthood funnels into our state, we won’t be intimidated.  We’ll remember Amendment 2.

In the words of David to King Saul as he resolved to fight Goliath, “Let no man’s heart fail on account of him; your servant will go and fight…”