BIRMINGHAM, AL — Planned Parenthood’s recent announcement about plans to build a new abortion center on a newly purchased downtown property in Birmingham might not be a surprise to anyone who has been paying attention.

The current Planned Parenthood Birmingham (PPB) clinic, located at 1211 27th Pl S, is undoubtedly a failing business. The facility has been unable to provide abortions for over a year — possibly to do with alarming deficiencies reported by the state (though the Department of Public Health has refused to act on those reports), or the rampant staffing problems the facility has experienced over the last few years.

Internal issues aside, however, the building itself is not in good working order. When news broke in late April that PPB had plans to build a new abortion center, its regional umbrella Planned Parenthood Southeast told the media that the current location was not even worth updating. Since then, citizens have raised the question: if even Planned Parenthood admits its building is not operable, why hasn’t the Department of Public Health shut it down?

Local sidewalk counselors confirm these deteriorating conditions. These counselors spend nearly every day outside of the clinic, offering citizens that come by safer and more legitimate healthcare options. They have confirmed an incredible decline in Planned Parenthood patients, especially over the last year. Alabama’s annual abortion stats also confirm this dramatic drop (see graph). Out of the five clinics left in the state, PPB has been the lowest performing clinic over the last three years. 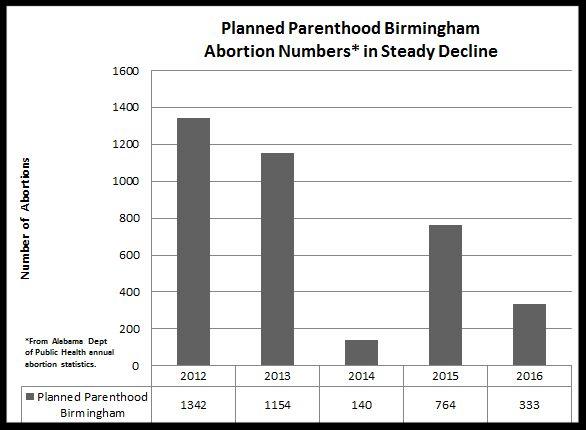 Anyone can see Planned Parenthood Birmingham is in a terrible predicament. The business is failing. The building is dilapidated. No one can even confirm if the facility has a regular doctor. If it ever hopes to make another profit in the city of Birmingham, Planned Parenthood knows it has to boost its clientele. So, the clinic is doing what well over half of the abortion giant’s affiliates across the country have already done:

Though Planned Parenthood Federation of America and its long list of political protectors ardently deny the targeting of Black neighborhoods to any reporter that will mindlessly repeat their claims, numbers never lie. To Planned Parenthood, Black women are a sure thing.

To prove it, in 2012 the research group Life Issues Institute created an interactive map showing the percentages of Black populations within a 2 mile radius of every Planned Parenthood in the country. This research revealed that an alarming 79% of Planned Parenthood’s abortion centers are located in neighborhoods with high populations of Black and Hispanic women.

A few years before that, filmmaker Mark Crutcher also released Maafa21, a documentary which detailed Planned Parenthood’s deep roots in racism and eugenics, and demonstrated the abortion giant’s long-standing methods for eliminating the Black population.

Behind the doors of our local Planned Parenthood, that goal has never changed. In fact, Alabama has one of the most disproportionate abortion rates in the entire country. While the Black population makes up just over 25% of Alabama’s total population, Black women are having over 60% of the state’s abortions.

Planned Parenthood of Birmingham is well aware of these numbers, and of how much money they can make from moving closer to Black neighborhoods. Their newly purchased property absolutely confirms that.

Take a look at the chart below. CEC For Life asked Lead Researcher of Life Issues Institute Susan W. Enouen to take a look at the census stats surrounding Planned Parenthood’s current location versus the new location. This is what she found: 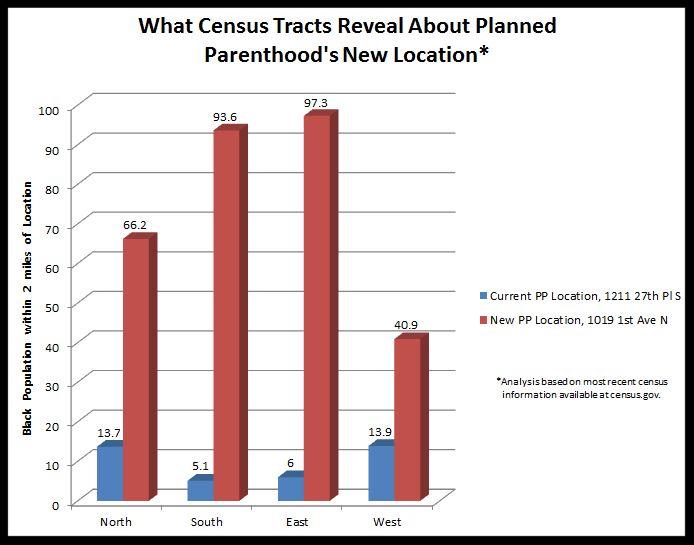 The blue bar shows the Black population surrounding PPB’s current location (1211 27th Pl S) within 2 miles. The red bar shows the Black population surrounding the new property (1019 1st Ave N). To the South and East of this new location, the population is made up almost entirely of Black men and women. That is not a coincidence. It’s a business model, and Planned Parenthood has been using it all across America for a hundred years to make billions of dollars.

Enouen points out, “By placing 79% of its surgical abortion facilities within a 2-mile walking distance of minority neighborhoods, and locating 80% of its modern abortion mega-centers near Black neighborhoods alone, Planned Parenthood has proven its intention to target minorities for abortion. In keeping with this apparently racist strategy, Planned Parenthood now wants to change its Birmingham location so that it can be embedded in the Black community, a move which puts more Black babies at risk for abortion.”

What the abortion giant tries to package as “supporting women of color,” the hard facts clearly reveal as an unwavering devotion to targeting, exploiting and eliminating the Black race. That’s why more than 19 million Black babies have been aborted since 1973. It’s also why Black women have a significantly higher rate of abortion than Whites or Hispanics.

She says, “The relocation of the Birmingham Planned Parenthood clinic into Black neighborhoods continues the strategy of the Negro Project launched by Margaret Sanger in 1939. This move furthers their desire to prevent births in the Black community while increasing their ability to deliberately kill babies in the womb.”

Planned Parenthood of Birmingham isn’t just moving locations because they need a new building, they are moving closer to the one group from which they can guarantee a profit — no matter what that costs the Black community. They aren’t coming to serve those neighborhoods; they are coming to kill Black children, injure Black mothers, and devastate Black fathers. And make a ton of money in the process.

CEC For Life, along with the entire pro-life community, say no to the decimation of our Black communities. We say no to Planned Parenthood’s insatiable appetite for destroying Black families. Birmingham has seen enough abuse and targeting of Black families in its violent, unfortunate past. Today’s Birmingham does not choose the violence of abortion. We choose to protect and uphold Black families. We choose to protect and uphold the sanctity of life. Every life. We do NOT choose Planned Parenthood.

Remember: Planned Parenthood is the only abortion game left in town, and no one is going through their doors! Perhaps that’s because our city never needed abortion. Never wanted it. Perhaps what we do want is to create a safe space for mothers and their preborn children.

We say NO to Planned Parenthood and YES to an abortion free Birmingham.